Chloe, it's March 28, 2011 and you are ten months old today!
*this post is two days late because we were out of town to see family! 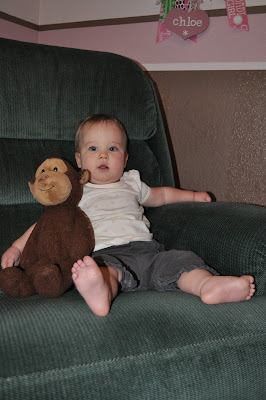 Naps and sleeping are going well. With the exception of a few bad days here and there, you sleep from 8pm to 8am and take a morning and afternoon nap.
You are eating whatever we eat now. You have a 6 oz. sippy cup of formula at breakfast and dinner with your meal. You have a little formula for morning and afternoon snack (just before nap time) and then you have 2oz. of formula before bed. We are weaning you from the bedtime bottle per your pediatrician's recommendation.
You still have 8 teeth. Your pedi says she sees a molar settling in but she doesn't think it's going to pop through the gums yet. It's too early for molars, Chloe.

I thought by now you would be standing without support; I was wrong. All in good time. 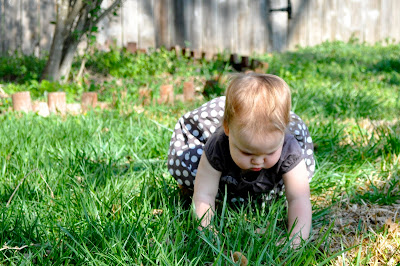 You are saying a few 'words' now. You've been saying 'yeah' for a while now but I didn't want that to be your fist word...guess it is what it is. You say 'uh oh' when you drop something. It comes out as 'oooooh' You say 'dah' for dog. I know you know what you're talking about because you will point to a dog and say 'dah.' You point at everything and want us to name it. You also say da-da and ma-ma (ma-ma only comes out when you're upset).
Sometimes when we say something (an example would be 'what is that?), you will mimic the intonation and inflection in our voices. We've stopped dead in our tracks a few times thinking you just said a full sentence. It's amazing but you really are just repeating sounds. 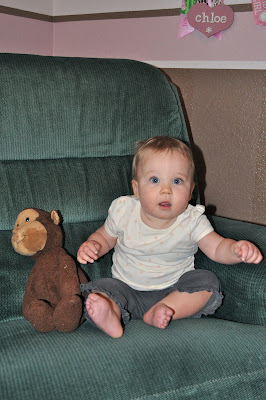 I can't believe that you are so close to being a toddler! You are a fun girl, Miss Chloe. We love you.