Stuck on the Lake

Saturday: Our friend, Cal, came back from living in Spain for over a year on Friday. So Saturday, Stuart, Mark's best friend, invited me Cal and Mark to his lake house for an evening on Lake LBJ. After driving around for a bit we decided to throw the anchor in so we could swim for a bit. After about 30 minutes, Stuart and the guys decided they wanted to do some tubing before the sun went down.

Stuart was on the tube while Cal was driving. We didn't get very far before the motor stopped. After a few seconds/minutes of trying to determine the cause, we realized that the anchor had not been pulled up. We had wrapped the rope around the prop! Ooops! We flagged a boat down and got a knife, tried to cut the rope, and discovered that the chain was actually caught around the prop (after our rescue boat had driven off). At that point (after about an hour of the guys taking turns trying to get the chain off by diving under the boat), Stuart decided to swim to shore and get some help. A very nice gentleman pulled us to shore and let us dock the boat there for the night. Turns out he was a fellow Red Raider! Gotta love those Red Raiders! His friend's wife (an Aggie) was nice too. She bandaged Mark's hand up after he cut it on the prop trying to get the chain off. All told, we were stranded from 7:45 p.m. until about 10 p.m. Lesson learned.

Sunday: We bought the dogs a kiddie pool. They love it! We are expected to be at or above 100 degrees every day this week so we thought the dogs might enjoy something cool. Clyde pretty much just lays in the pool and Tres splashes around. Pepper prefers to observe unless she needs to get the ball out when Tres or Clyde drags it into the water. 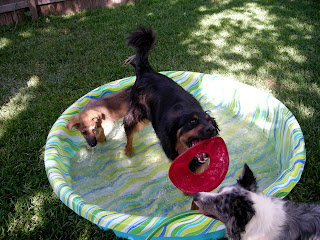 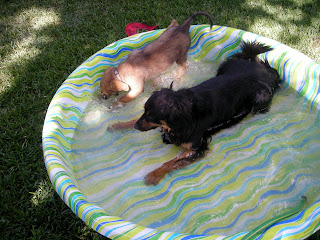 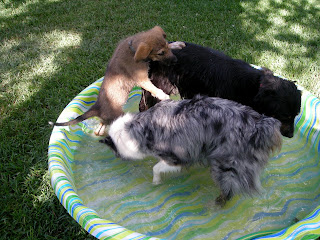 Monday (Today): I was working out in the garage (totally recommend P90X...Google it) and Mark runs in yelling 'pause it. Did you see what the dogs are playing with?' I jump up and run outside to see what he is so excited about...please remember that Mark is a pretty calm guy and doesn't get worked up about a whole lot. I run out the back door to see Tres chewing (you heard me) on a squirrel. Now I ask you, if I had seen them playing with a squirrel, especially a dead one, do you think I would leave it in the yard for the dogs' enjoyment?!? This is the first time that our dogs have killed another animal but I'm pretty sure that they had fun with their new squeaky toy. I'm sure this will not be the last dead squirrel we find.
4 comments:

So I have to brag for a moment. I'm actually really impressed with Tres. Last night Mark and I decided it was time to start some training with Tres. We have already mastered fetch ('go get it') if the other dogs are not around and 'sit.' Sit he seemed to pick up on his own...strange.

Anyway, yesterday was the day to learn 'shake.' What can I say? We want a polite dog!

We put him inside and gave him the command about five times. He wasn't really 'getting it' so we decided we would try a little everyday. We don't want him to get bored or frustrated with the new commands.

We put him back inside after a few hours and out of sheer impatience decided to try the 'shake' command one more time. He 'sat' and when I said 'shake,' he put his paw up! I couldn't believe it! Only a few hours ago he was uncooperative!

I thought it was a fluke so I left it alone and when I got home from work today, I tried it again. No fluke. He's figured it out.

I don't know if he ate a dog training book and is learning through osmosis or if the other dogs are giving him insider information but this dog is SMART! I think I should probably hide the car keys from him...in case he decides to learn how to drive. Geez!
3 comments: