This is just what we did today. The weather is gorgeous today. Mark has raked 20 bags of leaves and he still has half of the backyard before he finishes. We couldn't have had a nicer day to get our yard cleaned up for fall...yes I know it's winter for most people. It's still fall here...74 degrees today.

The Most Wonderful Time of the Year

We had a pretty good Christmas. I love this time of year and spending time with family. This one seemed to pass too quickly. I have plenty of pictures from Christmas in HTX with my family. I didn't get many from Christmas with Mark's family due to some unforeseen circumstances.


Chloe had potty training pants and silverware in her stocking. We will start potty training next week. She also got crayons, a coloring book, a puzzle and an outfit. Her big present was the Little People Zoo.


We don't really all share a bed...Mark snores too loud. haha.

Jesus Wants Me for a Sunbeam

A few days ago I was sitting in the living room doing some work on my computer. I kept hearing Chloe say "shoo, shoo!" I looked up to see if she was talking about a fly. Turns out she was dancing and swatting at some sunbeams that were streaming in through the open mini blinds. Where is the video camera when you need it?!? I jumped to grab my camera,but she was nearly done with her performance by the time it was rolling.

The whole thing was precious and made my heart dance. The joy that such simple things bring us, as children, seems to fade as we get older. I love these small reminders I get from watching my own daughter grow and learn. Immediately, I thought of  this song that we performed in children's choir when I was small!

Email ThisBlogThis!Share to TwitterShare to FacebookShare to Pinterest
Labels: granthamania

Chloe is a copy cat! She watched me cooking lunch and Rachael Ray cooking on the television and she made her own goodies. Dancing Elmo, her stuffed animal dog and even the plastic pop-up critters on her Playskool Busy Poppin' Pals toy all tried her fare. It was as good as air can taste! I know. I tried it.


I've tried a few new recipes, too. Here is one I found on Pinterest. I've checked out Leana's blog, where the recipe seems to have originated. It's a pretty fun place to look around. Check it out.

This recipe tastes just as delicious cold as it does hot! It's cheap. It's easy. It tastes unbelievably like real take-out. I can't wait to cook it again! I added Chicken to Mark's but left mine vegetarian. I'll probably try adding mushrooms, broccoli or tofu next time I cook it.

Email ThisBlogThis!Share to TwitterShare to FacebookShare to Pinterest
Labels: granthamania

Ok. You caught me. I stole that from a picture on Pinterest. But then again, almost everything on Pinterest is stolen borrowed from a more creative mind.

The purpose of the title is to reveal our...BRAND...NEW...LAUNDRY ROOM!

Before, our washer and dryer sat in a cove in our garage. Not a huge problem, but we couldn't leave clothes in the laundry room to air dry. They would smell like gasoline if we did. It also meant our washer and dryer always had a layer of dirt and dust on it. Don't even get me started on the bugs. I was always checking for bugs (specifically, prehistoric-size tree roaches...a common problem here) before walking out there.

We were lucky because somebody had already hung a door in the cove for easier access to the washer and dryer. That meant we only had to add a wall and do some minor electrical work in order make an indoor laundry room!

Please excuse the poor picture quality. I used my iPhone to take these.


I can't wait to hang some shelves in between the two cabinets. We will also do a touch of decorating in there. Not many people will ever see this room, but it's now one of my favorites! I love being able to do laundry INSIDE the house!

Thank you so much, Shorty and Pop! We really appreciate you taking two weekends out of your busy schedule to help us with this project. Chloe will be paying you with cuddles a long time for this one!
3 comments:

Our Visit with Santa...


Chloe has already been to see Santa (Sassy, as she calls him). She was less than thrilled this year. No matter how hard we tried, she would not smile. She was very serious the entire time. At one point, I thought she was going to jump out of his lap. But, she sat there like a good girl and glared at Mark and I for handing her to a hairier-than-dad stranger.

See how much as changed since last year? I can't believe that's the same baby!

We took some goofy pictures to commemorate: 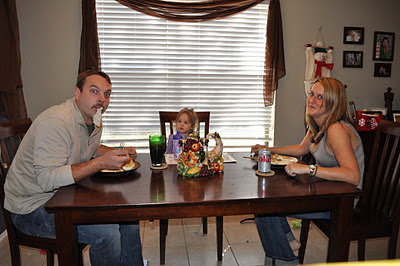 We are thankful for so much. Mark and I both have parents that love and respect our lives together. We have a healthy little family. Mark's job has allowed me to be home with Chloe during the first year and half (hopefully longer). We have a warm, beautiful home (even though I dream of moving to another home, soon) in a safe, quiet neighborhood. We have home filled with laughter. There really is nothing we NEED. We thank God for all of these amazing things He has done in our life. I would love to say that we worked and earned the blessings in our life, but the truth is that most of the things that are going well in our life are out of our control. It's God's hands that have guided the chips to fall where they lay.
5 comments:

Thankful for the Present.

Remember your past, just don't live in it. Dream for the future, and don't dread it. Take the present and enjoy it, before it becomes the past.

Email ThisBlogThis!Share to TwitterShare to FacebookShare to Pinterest
Labels: granthamania, inspire me, quotes

Rock and Roll in San Antonio

This past Sunday was my marathon. I lost track of how long I have been training, but I know I'm glad it's over. It's difficult to put into words what it feels like to work so long towards a life goal. I've wanted to run a marathon for a long time. I can't pinpoint when I started thinking about the ultimate 'race,' but the dream probably started somewhere around 7th grade (about 15 years ago) when I began running track.

The final push for me to actually sign up and train for a race was having Chloe. I felt like I could conquer the world after having a baby. After all, nothing could be more difficult, right?

I can now answer that question with a resounding "NO!" This marathon was a lot more difficult than labor and delivery.

But, am I glad I did it? Yes! Even as I write this (the day after the race), with sore knees, calves, quads, back and shoulders, I can tell you that it was worth every pain that I'm now enduring. By crossing that finish line at the end of 26.2 miles, I defeated my SELF. My doubts, inhibitions, my body and that part of my mind that tells me daily, "no you can't" is wrong. I can. I will. I did.

I don't expect anyone to understand how this whole experience affected me. That would be impossible. After all, every single runner out there on Sunday had a different experience and took away something different.
Now for the play by play:
It was 60 something degrees and 100% humidity when we started the race. I was in corral 15. When it was our corral's turn to start, I had no nerves. I think the lady I was talking to before the race helped me settle those. A big thanks to her!
Mark set up shop at mile 3, 8 and 10 to take pictures. Around mile 11, the race split off and Mark could no longer watch. I felt great the first 15 miles. It was around mile 17 that my mind and body started getting the better of me.

Every time my feet hit the ground, pain radiated in the balls of my feet. (If I had been paying attention to my running gear, I would have purchased new shoes a few weeks before the race. Instead I was running in worn out gear with little cushion on the soles.) It also didn't help that the people around me were walking. It's very tempting to walk with them. So around mile 18, I started walking through the water stations. Partly in effort to make sure I was actually getting to eat the salt packets (that's right) and drink the water (it's difficult to drink while you're running) and partly to save energy so I could finish the race running.

At mile 20, I was physically spent. I was walking through water stations and a little between them. The two miles between the 24 marker and the 26 market felt like another 5 miles. And the .2 mile before the finish line was the longest, steepest hill in the race. I took somewhere between 5 and 10 walking steps before I saw Mark yelling at me. Everyone along the finish line was saying 'It's just around the corner' so I sucked it up and started running again. They were right. I turned the corner and saw the finish line. I started crying and my throat closed up making it hard to breath, so I pushed the sobs back down and ran as fast as I could (which wasn't fast at all) to grab my metal.
My official time: 4:54:17
117 out of 311 in my division (Females 25-29)
643 out of 1783 in my gender
1771 out of 4040 in the race

That wasn't as good as I hoped for but I'm glad I finished under the 5 hour mark.

"Running is a road to self-awareness and self-reliance. You can push yourself to extremes and learn the harsh reality of your physical and mental limitations or coast quietly down a solitary path watching the Earth spin at your feet. But, when you are through, exhilarated and exhausted, at least for the moment, everything seems right in the world." (-Unknown)
Say a quick prayer for the family of a fellow runner and Red Raider who passed away after completing the half marathon on Sunday.
5 comments:

While Mark and I were in NOLA, Chloe stayed with my parents. My mom was awesome and sent us picture of Chloe while we were gone. Here are some of them:﻿

﻿Now for the grand finale. Chloe has a pretty extensive vocabulary for a 17 month old. This past week, she learned the word 'frog.' Her toddler lisp...if that's what you call it...makes it sound like a 'choice' word. I'll let you decide. haha. Turn your volume up and listen good...
6 comments: