It's 6 p.m. on Wednesday when I am writing this. We have a terrible storm in Austin right now! I thought the windows were going to get knocked out. Don't worry. The tornadoes are gone and the hail has stopped but the rain and lighting continues. Right now Mark is driving back from Georgetown through the very heart of the storm. He should be here any second. I hope he (and the new car) are injury free.

Here are some pictures from my front and back yard. It looks like it snowed but it's golf ball sized hail. The 'grass' that you see in the picture is not grass. It is, in fact, tree branches and leaves from the oaks in our yard. I'm pretty sure that we won't have to hire a tree trimmer this year! 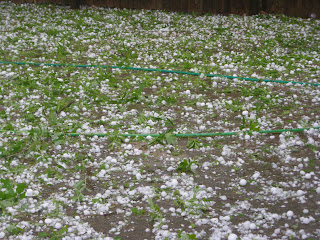 This is our driveway (above). 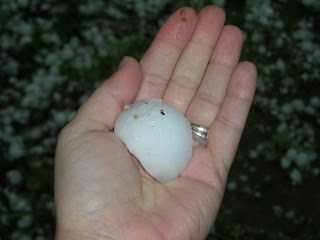 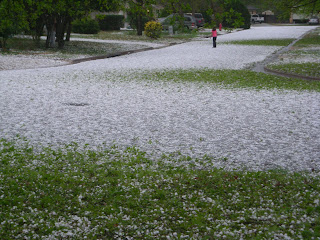 This is the street in front of our house(above)! Looks like it snowed. The green stuff is also the street. Just debris from the tree! 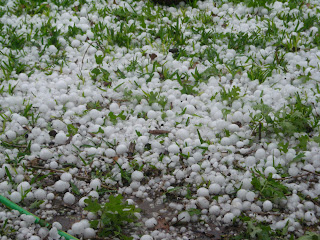 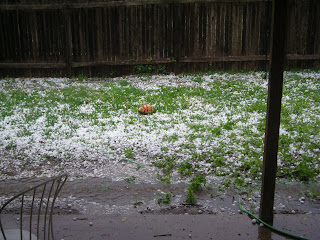 We Didn't Start the Fire

Mark and I traveled to San Antonio on Saturday to watch the Billy Joel/Elton John concert. Mark had purchased the tickets back in December even though we had agreed not to have Christmas/Birthday gifts for each other. What can I say? I quickly forgave him his transgression.

Although the concert was fabulous, I do have to say that San Antonio is now last on my list of Texas cities in which I would live if forced to move from Austin. We experience the WORST customer service of our lives in nearly every restaurant, hotel and place of business we visited on our mini vacation. I'll spare you the details.

The concert began with Billy Joel and Elton John playing a few songs together. It was pretty funny when Billy Joel came onto the stage because they started playing Yankee Doodle and when Elton came on stage they played some (forgive me if I don't know the song...I'm sure it's something very important in England) British march.

After they played together, Billy Joel left the stage so Elton John could play. Let me say that I was really impressed with how well Elton John can rock the the stage. I know he's a bad ass but he does play the piano. However, his show was filled with amazing guitar solos!

Billy Joel was my favorite by a smidgen. I didn't know that he was a comedian! He is a little dirty with his jokes but they are sooooo funny! His back was to us when he first started playing so he points at our side of the audience and says, 'You guys are getting screwed. No, but you are getting a lot of head!' Then he rubbed his bald head. The audience died laughing. That wasn't the end of his jokes but you really had to be there.

Forgive the quality of this video it was taken with my camera but this gives a small taste. The song is 'River of Dreams,' which holds special meaning for my family. My mom used to sing this song with us when we were little and it was so fun to sing together in the car! Please notice that in the middle of the song, Billy Joel stops the song and starts playing, 'Deep in the Heart of Texas' to which the audience sings along. He then finished up 'River of Dreams.'

Thanks Mark, for taking me!
3 comments:

You have to watch this...

This is only Part 2 if you want to watch more click here. There is a part 1 and a part 3. Jon Stewart is a genius!

I gave my blog another makeover, as you can see. I borrowed the title from my brother's clever mind. Thanks, Josh!

First, can I say that I love love love this time of year. It's (almost) officially spring! It's rainy and cold here today but the flowers are blooming the trees are budding and the grass is getting green! I can't wait to do some yardwork out front.

There isn't a whole lot going on around here. I went to visit my family in Houston last weekend. Mom and I went to Galveston to get some sun and see the recovery efforts, which are looking pretty good. (Check out her blog for more on that.) I had a lot of fun hanging out with the fam. I miss getting to see them all everyday.

I hope you are enjoying your spring as much as we are! Camping season is upon us and I can't wait!
4 comments:

I just want to share more information that I probably should...we just finished our taxes. We owed money this year! We expected it so we were prepared but I just wanted to say that I think that's BS since we have already paid almost 1/2 of my current salary in taxes in 2008...they want more?!??

I'm okay with paying taxes but at my current job, all I hear is people coming in with unemployment checks saying they can't wait to get their 'stimulus' money. Well guess what! You're welcome *insert explicative.* You just got half my salary...you better spend it wisely!!!!
No comments:

Mark and I had to bite it and make a big purchase. We have been lucky enough to not have car payments. I drive a Jeep that my parents gave to us, which has already been paid for, and Mark has been driving his sister's Nissan Altima, which was a lease. Sadly, that lease is up and we had to return the car last Friday.

We decided that a Mazda CX-7 suits our needs pretty nicely. It's a 2007 and we are enjoying it a lot! We splurged and got the sun roof and the Bose system with the six disc CD changer. It also has a tap-shift that allows us to drive it like a standard rather than an automatic transmission! 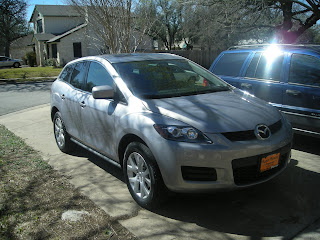 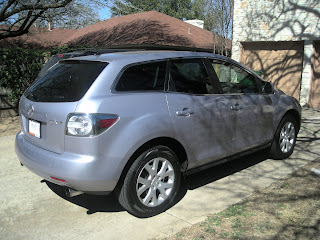 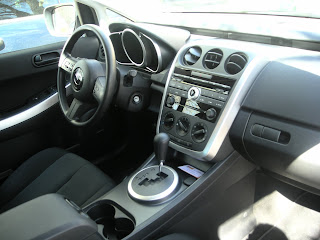