Mommy and Daddy needed a Vacation

Two weeks ago, Mark and I were on our way to board a boat. A big boat. We took a Carnival cruise out of Galveston. We had it planned for months. We payed for the trip in full well before we put our house on the market.

As luck would have it (and I'm not complaining), our closing date was set for two days (2 DAYS) after we disembarked the ship. It wasn't as awful as we anticipated. We did lots of planning and preparing in the weeks leading up to our vacation. We also had family and friends who provided so much support during those two days.

But before I move on to talking about our new pad, I want to share our trip. We left on a Thursday sailed to Cozumel, Mexico and returned on Monday. It was four nights of relaxation and it was just what the doctor ordered for all the stress that a move entails.

There aren't many pictures because:
We did see a waterspout while we were sunbathing the first day. I wish I had my camera while we were out that afternoon. It was so beautiful to watch from a distance. Other than that, there wasn't much excitement which was exactly the way we wanted it. We had enough excitement going on at home.

In case you are wondering, Chloe had a mini-vacation of her own while we were gone. She staying with Shorty and Pop in Houston. In fact, she stayed with them for two extra days while we finished with closing and moving. It was sure hard for this momma to leave her behind after we returned from our cruise. More than a few tears were shed, but it was the right thing for Chloe. She got some extra loving and attention from her grandparents. 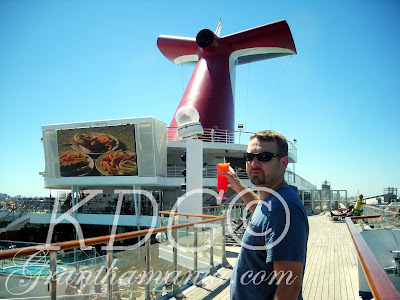 ﻿
As you've probably figured out, we are officially in our new home. We closed on our old house at 9:30 the Wednesday after we returned. Then we immediately drove to another title company to close on our new home at 10:30. I had the keys to the new home by 1:30 on Wednesday.

Something I never anticipated was how much more complicated a move is when you are selling AND buying a house. This is the first time we've had to make such coordinated move. Last time, we had a few weeks to move out of our apartment and into the home we purchased after our wedding. This time, in order to avoid living at a friend's house or in a hotel for a few days, we had to be very strategic about closing dates and times. Thankfully, our real estate agent was amazing and coordinated everything perfectly. We literally loaded up the moving van on Tuesday night (with the help of some awesome friends), slept on the floor of our bedroom with two pillows and one blanket, woke up and went to signing, and then unloaded the van at the new house on Wednesday. Whew, I get tired just thinking about those two days. It was a lot. It was totally worth it!