We woke up at 7 a.m. on Thursday. Again, not sure why. Our timing was off the whole trip. I guess we were just really excited to do EVERYTHING! My plan was to go purchase our Chicago GoCards which allow us access to most of the museums, tours and give discounts to restaurants and gift shops. I wasn't thinking about the fact that the store that sold them didn't open until 10 a.m. After this discovery, we spent 8 - 10 a.m. wondering around Grant Park. I'm glad we did; we saw some interesting artwork.

Let's back track for a second to breakfast (we'll discuss artwork next). Mark and I made a stop at Dunkin Donuts before starting our big adventure for the day. After picking up our donuts, we decided to walk across the street to some park benches to eat. There was barely room to stand in Dunkin, so eating inside was out of the question. As we approached the crosswalk, a bum walked right up to Mark. This is the 'conversation' they had:

Can you say crazy?!? I would have gladly bought him a donut but the thing is...he knew we were tourists and he was just seeing how far he could push Mark. Jokes on him. He didn't know how much Mark likes his donuts. The bum never stood a chance.

Back to the artwork in Grant Park. I can't remember who commissioned the series, but the artists were asked to produce art from used car parts and other mechanical pieces. The first picture is Mark sitting on a park bench made of car windows and the second is a jumble of car exhaust pipes. 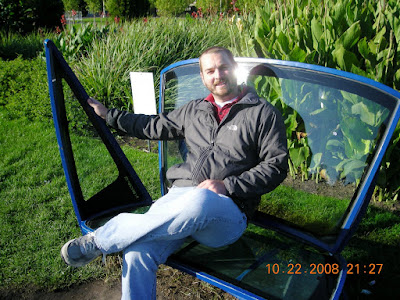 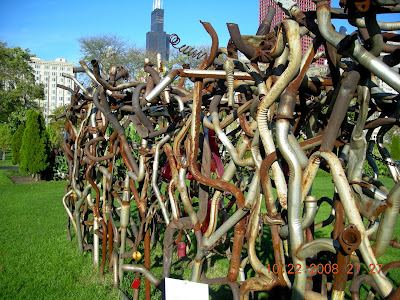 After picking up our GoCards (I highly recommend these...you can get them in most major cities), we went to the Natural History Museum. There were a lot of really cool exhibits but they are famous for having the most complete T-Rex Skeleton. It is over 90% complete. Its head is so heavy (600lbs...i think) that they had to make a replica for the skeleton and display the real skull in a glass box. Mark had to start a fight with the statue in the museum. 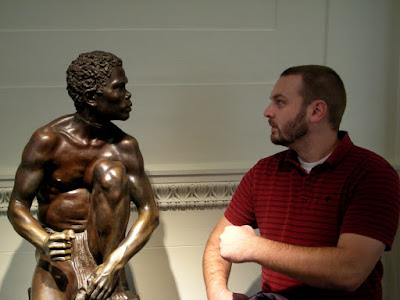 Next up was Shedd Aquarium. Mark and I agreed that this was the worst aquarium we had ever seen but the Dolphin and Shark exhibits were closed and we all know the only reason you go to an aquarium is to see sharks, whales, dolphins or seals (of which, they had none). LAME.

So we left the aquarium in a record 30 minutes and hopped a cab to the Science and Industry Museum. This was one of the coolest museums we saw. Mark played Godzilla in the replica of Chicago (can you see him?) and I drove a submarine! 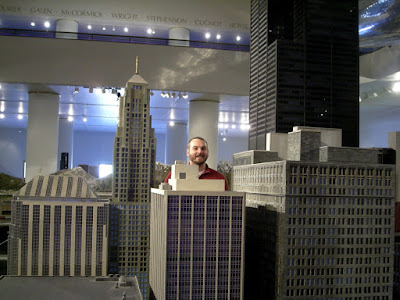 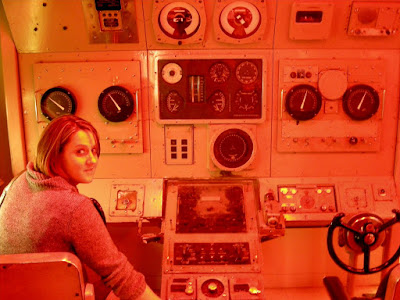 When we were finished playing (yes, playing. we are both kids at heart and we aim to stay that way) at the Science and Industry museum, we took a cab back to our hotel, rested for a few minutes and took off to find a restaurant. Let me be clear that we did not plan our dining experiences in advance so we simply wandered around the city until we found something that looked interesting. What we found was Harry Caray's Italian Steakhouse. It was neat (everyone loves Harry Caray) but the dinner was overpriced, the atmosphere was touristy and Mark's steak was far from being Texas quality. Still, we enjoyed it.

We were much too tired to take on anything else...we walked ALOT! We were back at the hotel by 8 p.m. to call it a night.

Click here to look at more pictures from Thursday of our trip.