Do I have any readers left?

I spent the last few weeks preparing for our gender reveal party. I didn't have to do much. My mom came in town to help and my friends Stephanie and Katie made all the food. Even with all the help, one of the only things on our minds lately has been the 20 week anatomy scan where the doctor reveals the gender. 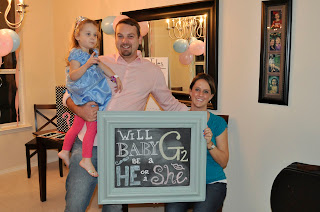 I made this sign from a Goodwill find. It was easy and fun. Maybe I'll do a tutorial. 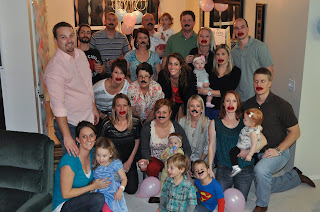 We asked all our friends to wear wax lips or mustaches based on their prediction. 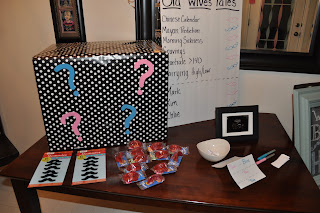 This is the guessing table. All of our guests made a guess and we drew a name from the winning guesses. Our friend, Mike, won a gift certificate to the movie theater.
The box you see in the picture was filled with either pink or blue balloons. We didn't know what color was inside until we opened it (see: picture below). We accomplished this by having the doctor seal an envelope with the gender written inside. The doctor did not share the gender with us. We took the envelope to Party City where I asked an employee to open the envelope and put the corresponding color in the box. The employee was only too eager to help out! We wrapped the box at home and we were none the wiser to the color inside.
Chloe helped Mark and I open the box once our friends were at our house. 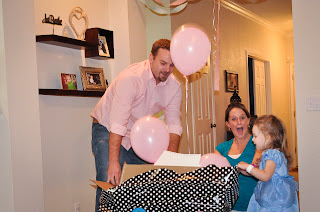 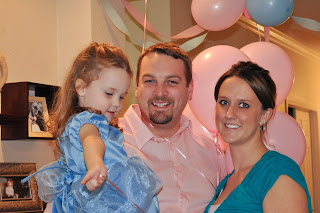 Mark and I were both pretty certain it was a girl. We were right about Chloe and this one. I'll let you in on our secret for guessing. We use roulette philosophy. If it's hitting black, it's bound to hit red sooner or later. haha. See, everybody we know either has boy/girl combos or boy/boy combos. Nobody has girl/girl. Even both sets of neighbors have boy/boy. So we knew somebody had to have a house full of girls. We were right!