For those of you that do not know, LAX is lacrosse. Did you know that lacrosse is the oldest, true American sport? A lot of people think that it's European. WRONG! Native Americans were playing the sport long before the Europeans even found the Americas. The Native Americans' played lacrosse for things like preparing for war and healing their sick. I've heard that their games sometimes lasted for days...I'm glad to say that is not the case today.

We spent the weekend at Zilker Park where the lacrosse league that Mark plays for was having their championship tournament. I spent Saturday and Sunday watching the games and am proud to say that Mark's team won the tournament and are the official champions this season. 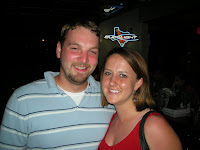 Needless to say, Mark and I are both pretty burnt from being outside so much. Here is a pic of Meat, Rose, Glass and Mark at bar after the game. All of these guys played lacrosse at Tech. Wreck 'em. 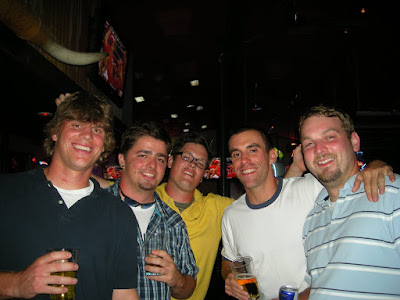