Spring Fever and the Rodeo

Spring fever is in full force around here. We've had some teaser days in the near 90s. The past three days have been 60ish. I know that's warm for some of you, but I would prefer 70-80. I'm spoiled. The truth is: we have a wonderful spring in this neck of the woods, but it's short lived. We'll be hitting triple digits on a daily basis soon. I relish this weather. 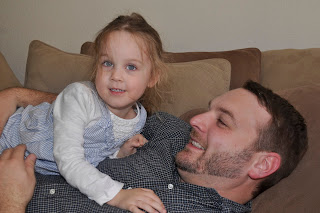 I had to include this picture. Chloe doesn't cuddle much, but she makes an exception for Dad. 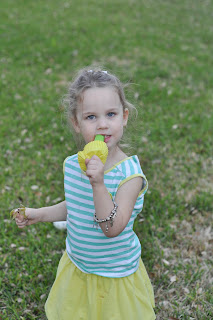 See what I mean about spring fever...Popsicles are a frequent outdoor treat right now. 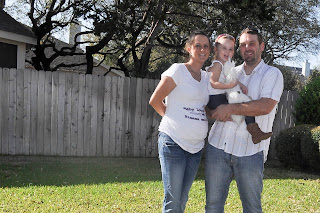 We went to the Austin Fair and Rodeo on March 16. We didn't actually go to the rodeo. It cost $25/person. $75 seems a bit steep to try and haul a toddler along. She would have loved it, but would have lost interest too soon to justify that kind of cash. We'll take her when she's older and can remember. We settled for the fair and stock show this time. 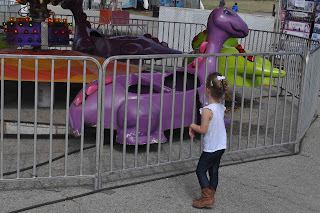 I underestimated Chloe this year. She ran up to this ride as soon as we walked though the fair gate  saying, "I want to ride the dinosaur!" I really thought she would get more out of the animals, but she was all about the rides and the games. She even rode a roller coaster (kiddie coaster) with her dad! 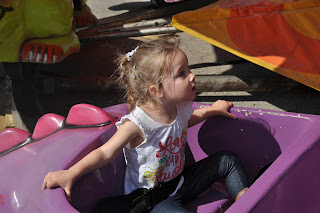 The picture above is when she started to get skeptical of the ride. The first two times around she was smiling. These rides went so fast! 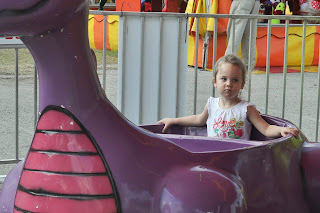 Clearly wondering when this ride is going to be over. She looked like she might start crying on the next trip around. Thankfully the guy running the ride was pretty in-tune with her and stopped it before the waterworks started (she was the only kid on the ride). Of course, this experience didn't slow her down any. She still wanted to ride all the rides. Every single time she would act scared, ask to be done, and then run to the next ride to do it all again. 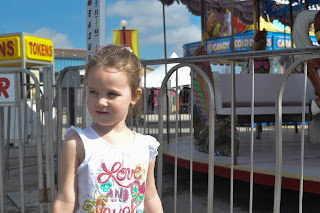 Really wanting to ride the carousel. Mom and Dad made her wait until after the 'critter expedition.' 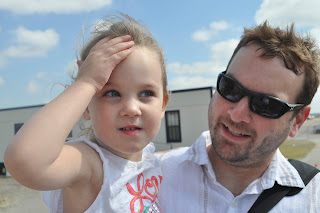 Dad and Chloe looking at a pony. 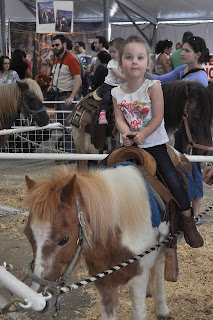 The pony ride. We paid $3 to get the picture ride the pony, but Chloe started crying as soon as the pony started moving. Mark took her off and we were leaving, but the guy running the ride gave us back our money. How nice was that? We fully expected them to keep it. God bless people that treat others' they way they would want to be treated. 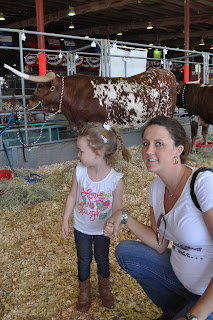 She does not trust the longhorn behind us. (Righly so...Wreck 'em Tech!) 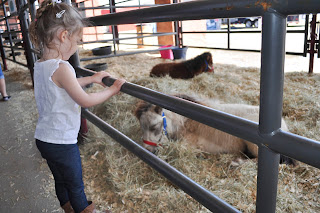 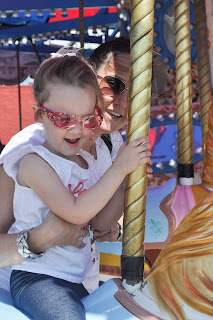 Finally she got to ride the carousel! She was not this happy when we first got on board. I guess after the live-pony trauma she wasn't too sure about the fiberglass one. But after I demonstrated some over-the-top enthusiasm, she changed her tune and had a blast. 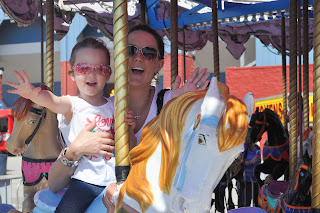 I have a video of Mark and her riding the roller coaster, but you can't see Chloe at all and Mark looks like a freak, giant riding in a little kid roller coaster! haha. There was another full-grown man in the seat behind him, but he looks like an elf compared to Mark.
Now for the bump update. I'm currently 29 weeks. The picture of me in white is the new baby at 27 weeks. The picture of me in purple is the Chloe photo. I'm feeling pretty good most of the time. I still get a little nauseous at night sometimes. I'm just excited to only have 11 weeks left! June won't get her soon enough. Little miss still doesn't have a name. I think we have it narrowed down to two. I'm just not 100% sold on either one. We may have to wait and meet her. It always drives me crazy when people won't share the name they picked. Believe me, we just don't know...it's not a secret. 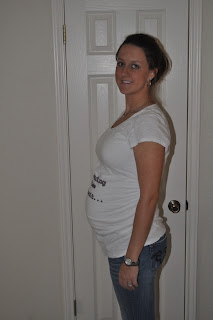 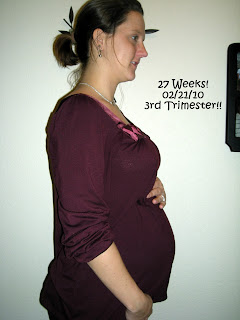