This is the last of the home tour. I'll probably show before/after pictures as we do some updating on the house. Right now we don't have any work planned, but we know what our projects are for the future.

Below is Chloe's room. I decided to go with a blue since her room at our other house was pink. I needed to change it up a bit. She seems to like it. I knew I wanted polka dots, but I wasn't really sure how to accomplish the task. I've never used a stencil, but I was pretty sure it would be messy and smudge everywhere. After checking out the InterWeb, I came across this YouTube video on Polka Dot Wall Painting. It was a perfect solution. It was so easy and fast! Chloe loves it and she tries to lick the wall the dots on the wall...she seems to think it's ice cream.﻿ 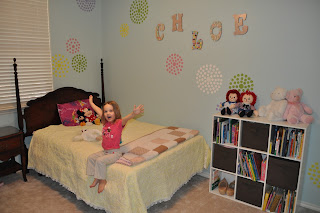 As you can see, I only did one and a half walls with the dots. I didn't want the whole room to be so busy. 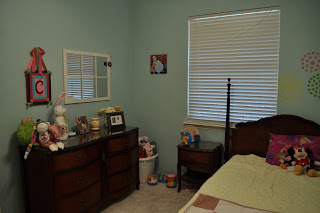 This is the laundry room. It's directly across from Chloe's room. I'll eventually paint and put some organizational shelving and such in here. 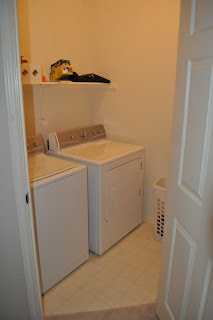 Now, don't judge. I was going to clean this room for pictures, but then I decided to just be honest. This is the second guest room. It's not decorated. I use it to sort and fold my laundry. I haven't bothered decorating it, because it's going to be a baby room in a few short months! That's right... 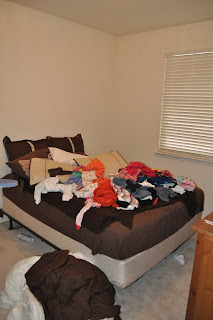 We are having baby G2 in June of 2013. We are about 14 weeks right now...starting the second trimester.

Chloe turns 3 in May and this baby will make his/her appearance shortly after her celebration. We are so excited! 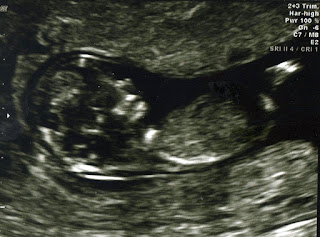 Chloe is very adamant that she wants a brother. Mark is sure it's another girl. I have no idea nor do I care. I really don't. I would love to have son and think I would be sad to never have a boy. But, Chloe's so much fun that another girl would be a wonderful addition...plus I have a lot of girl clothes. We'll know more in January!